Harrisburg Township Park District's Annual Candy Cane Hunt will be held Saturday, December 3, 2022 at 10:30 AM at the Kiwanis Shelter in Paul Emery Park.

Hot Chocolate and Cookies will be provided by the Kiwanis Club of Harrisburg.  Take your own picture with Santa Claus at the event!  There will be many gift card prizes attached to some of the hidden candy canes.  Please come out and enjoy this fun event with us!

Harrisburg Township Park District (HTPD) utilizes an online platform called SportsEngine for the youth recreation registrations and for sending out general announcements.  There are instructions below on how to access the HTPD page via computer or mobile device and how to install the SportsEngine App and become a HTPD Member.

Harrisburg Township Park District has joined forces with GGLeagues, an online esports gaming company, to bring in a new program that offers players a safe and fun way to participate in a community activity from home.  Esports is a rapidly growing competition venue around the world.  While we are not going worldwide, we are going statewide by participating in the Illinois Esports Rec League through GGLeagues.

We are excited to be offering this great new opportunity to the area. Not only will the esports experience provide players with a safe alternative to getting together in person, it also provides a great opportunity to compete in an environment for those that may not be able to or choose not to play in traditional sports.

“GGLeagues is excited to be partnering with Harrisburg Township Park District to bring esports to their community. Esports continues to grow and it's communities like Harrisburg who are at the forefront of bringing esports to recreational gamers. We are thrilled to be empowering our partners to provide fun, safe esports competitions for players of all skills and ages.” Says Erich Bao, CEO of GGLeagues.

There are three age groups: youth division (ages 8-12), teen division (ages 13-18), adult division (ages 18+). Players will participate from their own homes and by purchasing a GGLeagues esports pass and can compete in as many different games as they would like.

Throughout 2022 GGLeagues will be offering esports leagues, educational events, free gaming events, and more in your community.  Leagues will be run online through GGLeagues and will consist of an eight-week season.  Games will be at the same time and day each week with a flexible rescheduling policy.  At the end of the season, players will participate in a two week playoff and championship event to crown the champion.

To play, you must have a console/computer to play on, email address, own the game you are registering to play and have the ability to play live.  All games are monitored by GGLeagues and players are held to a code of conduct to maintain a fun and safe gaming atmosphere.

See the Harrisburg Township Park District page on GGLeagues website for additional details or to Register. 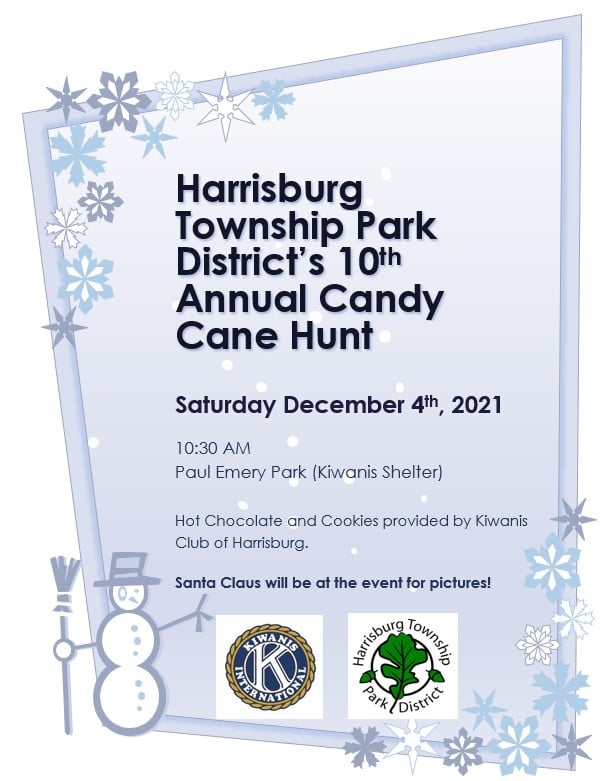 All Registrations will need to be completed online. Please visit the following website for links to the Registrations through SportsEngine:

Also, if you are willing to coach (head or assistant) please fill out the additional Coach Registrations.

HYA is in need of additional umpires for the upcoming season.
Click Below to register to umpire.

https://harrisburgparkdistrictsports.sportngin.com/register/form/779105476
If you have any questions please call the Park Office at 618-252-2111.
More information can also be found at www.harrisburgpark.net/HYA-Umpires

HYA is now utilizing SportsEngine to register umpires for the 2021 Recreation Baseball and Softball Season.

If you have any questions please email

bemery@harrisburgpark.net or call the Park Office at

More information can also be found at

Practices are starting this week. This year HYA is utilizing the Sports Engine App for Communication and Schedules purposes. We have sent out emails and made posts on several of these items mentioned below. Sometimes the emails have been going to junk mail. You might need to check your Junk Mail and approve the sender. Also it will be helpful to include your mobile number in your account profile and enable text message settings if you prefer.
How to download the Sports Engine App:

https://help.sportsengine.com/en/articles/861
How to add an additional Parent/Guardian to a player profile:

https://se-mobile-app.elevio.help/en/articles/9-how-to-add-a-guardian
How to enable notifications:

https://se-mobile-app.elevio.help/en/articles/54-how-to-enable-push-notifications
How to send a message in SportsEngine App:

https://se-mobile-app.elevio.help/en/articles/37
Some general SportsEngine App instructions can be found on the HTPD SportsEngine Webpage:

https://harrisburgparkdistrictsports.sportngin.com/forparents
If you need any help with the Sports Engine App please contact the Harrisburg Park Office at 618-252-2111.

It was a wonderful radio auction today. If you won an item or items and were not able to pick them up today please contact the park office at 618-252-2111 on Monday to schedule a time to pick up and pay for your items. Thanks. 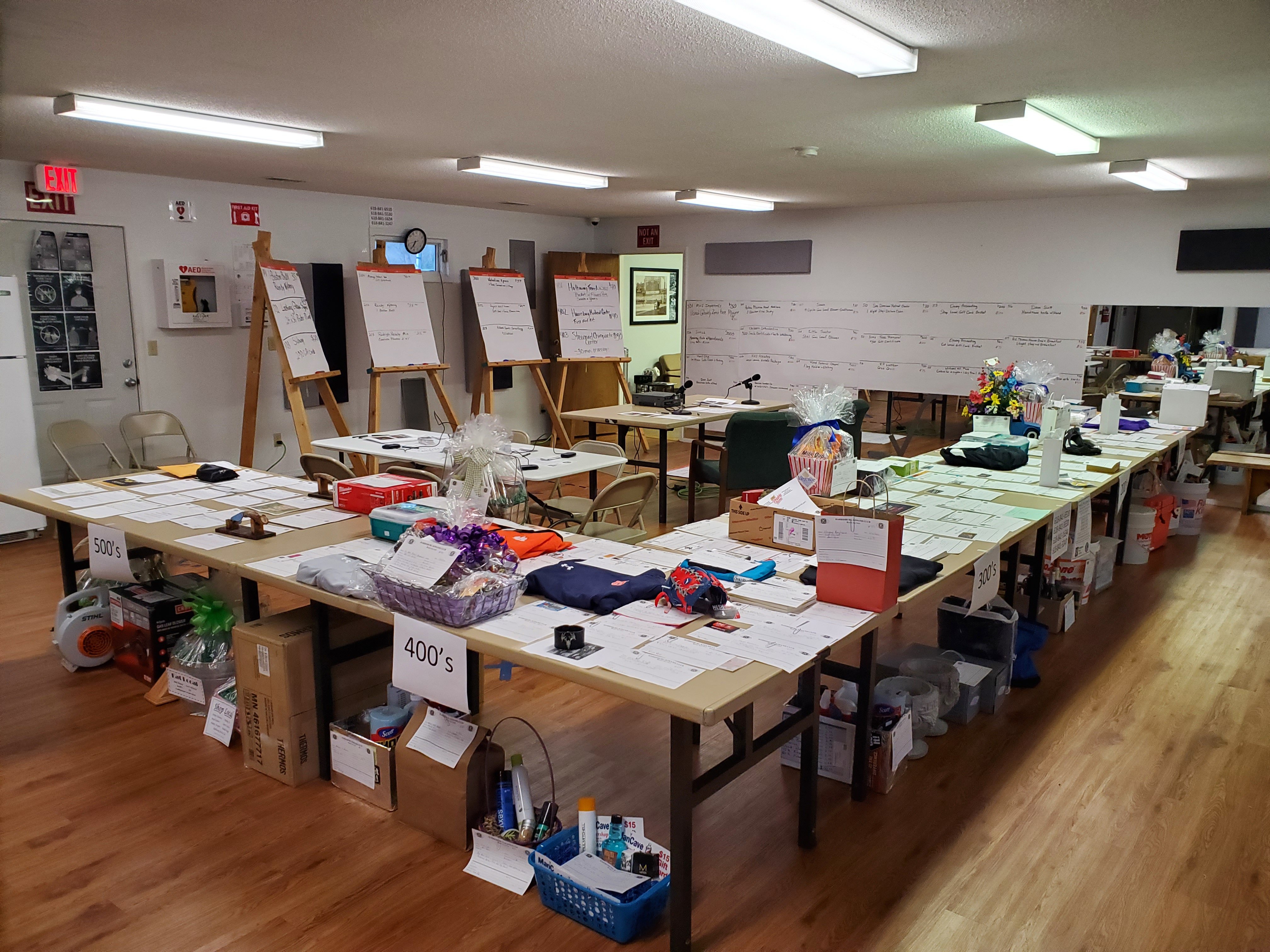 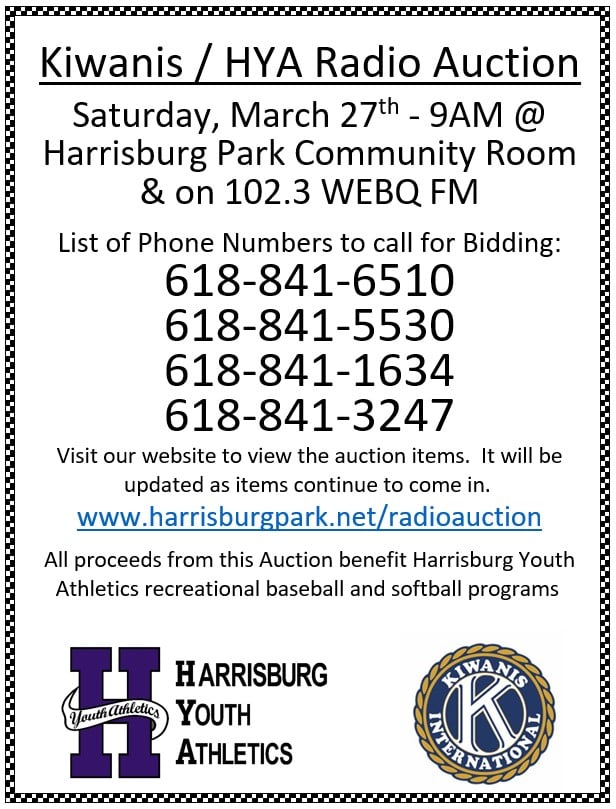 HYA has selected all teams for the upcoming 2021 Recreation Baseball and Softball Leagues.

If you have not downloaded the SportsEngine Mobile App please do so.

Please sign into the SportsEngine App and your participant’s team should show up.  Your coaches will also be reaching out to you sometime soon.

https://harrisburgparkdistrictsports.sportngin.com/) starting in 2021 for the youth recreation baseball and softball leagues.
Registration for HYA recreation baseball and softball leagues ends February 20, 2021 at 12:00 PM. Late Registrations will be on an as needed basis to fill up any available roster spots and will be charged a late fee.Please call or email the Park Office for more information at 618-252-2111 or office@harrisburgpark.net or visit

https://harrisburgparkdistrictsports.sportngin.com/register/form/464393143
Register to be Head Coach or Assistant Coach:

Regions 5 (Southern) has met the metrics to return to Phase 4 of the Restore Illinois Plan.

DCEO Phase 4 information can be found

As a reminder, youth and recreational sports may also resume play subject to the All Sports Policy when regions move out of Tier 3.

of the mitigations for each tier was just released.

Due to current COVID-19 regulations, the 2021 Annual Kiwanis/HYA Radio Auction will not be held at its normal time (the last weekend in January) and has tentatively been rescheduled for Saturday, March 27, 2021.  Look for more details to come out in March.

Registration for HYA recreation baseball and softball leagues will start on January 13, 2021 and ends February 20, 2021 at 12:00 PM.  Late Registrations will be on an as needed basis to fill up any available roster spots and will be charged a late fee.

Please call or email the Park Office for more information at 618-252-2111 or office@harrisburgpark.net.

The PDF document below contains up to date decisions made by the Park Board of Commissioners at various meetings. The document will be updated as new decisions are made.  Information from the Restore Illinois Plan Phase 4 and Tier 3 Mitigation Guidelines was used as valuable guidance in making decisions.  More general information on the Restore Illinois Guidelines can be found at

8/21/2020 - The Harrisburg Township Park District is proud to announce the opening of the first phase of its newly constructed skatepark.  The skatepark equipment was installed this week and is now officially open for the public to enjoy.  The new skatepark is located near the basketball / pickleball / tennis courts at Paul Emery Park.  A list of all rules and guidelines can be found in the attached images.

Pictured below are (from left to right) Executive Director Blake Emery, Board President Richard Rumsey, Board Secretary/Treasurer Mike Williams, Maintenance Director TA Sullivan, and Board Vice President Doug Emery.  Thank you all for your efforts in making this project a success. 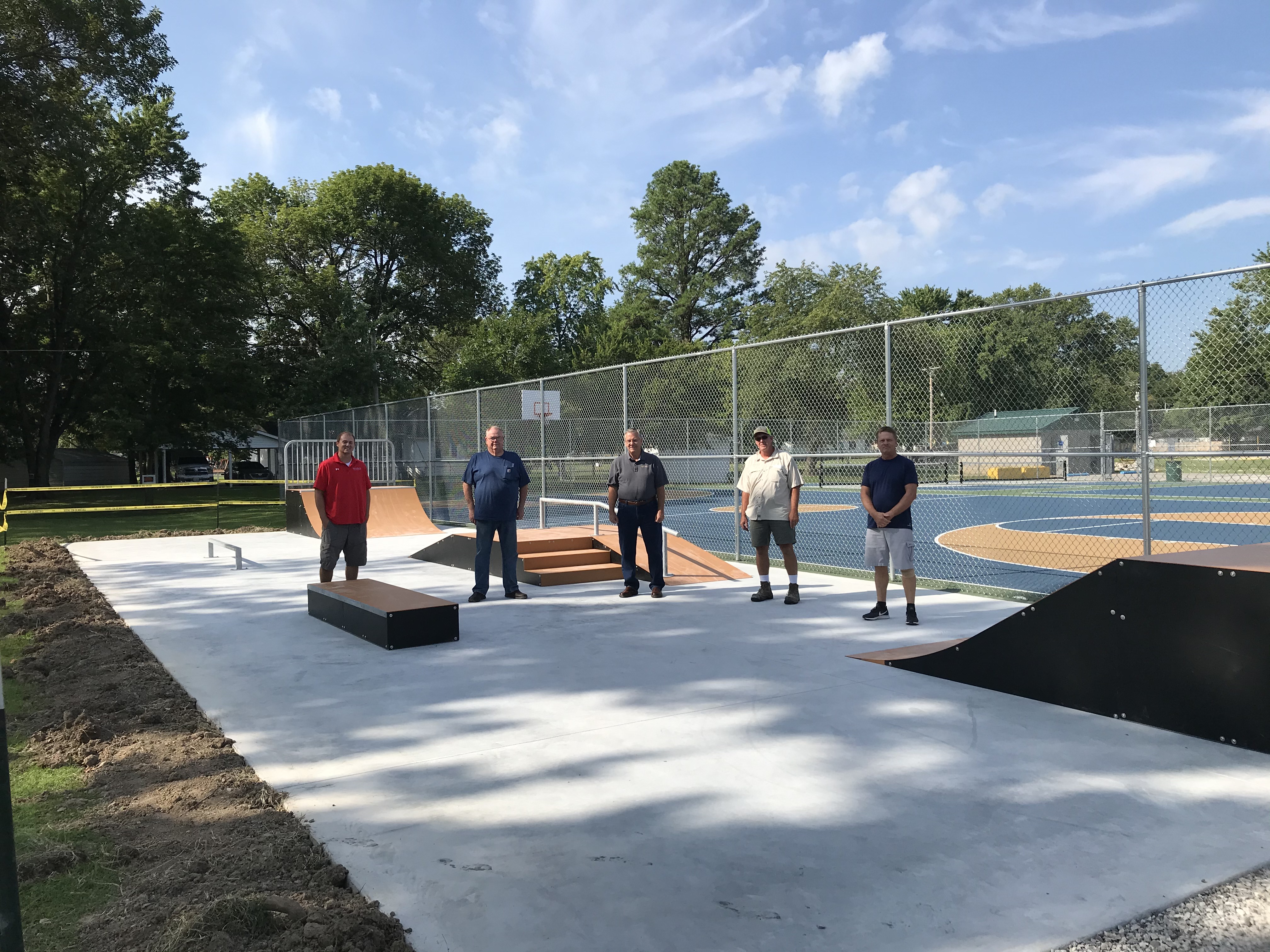 Harrisburg Youth Athletics (HYA) has made the decision to cancel the 2020 Flag Football Season.  Concerns about the health and safety of participants, volunteers, and all community members were at the forefront of the decision.  Also, the recently updated Restore Illinois Phase 4 Youth and Adult Sports Guidance does not allow Flag Football games to be played at this time.  We look forward to providing Flag Football next year and thanks for all the local support to HYA.

Harrisburg Youth Athletics (HYA) has come to the difficult decision that we cannot guarantee we will have HYA Travel Teams for the 2021 Baseball/Softball Season.  With the rise in other organization travel teams in our area, we have had a difficult time competing with them to fill our travel team rosters.  HYA does not want to guarantee a travel team and then not have enough players tryout to fill the roster.  This, along with players not fully committing to the HYA Travel Teams, has been an issue lately.  If any travel group would like to remain or form an HYA Affiliated Travel Team for the 2021 Season we would gladly consider that request.  Please contact the park office if you would like more information.

Bill Trees Memorial Park Pool will continue to remain closed for the 2020 Swim Season. Concerns regarding the health and safety of patrons and employees as well as several operational difficulties to overcome were the basis of the decision making process.  We are disappointed that these measures must be taken, but we want to remind everyone of our commitment to the park pool and we look forward to having the pool open next year.

Bill Trees Memorial Park Pool will continue to remain closed until further notice. The pool operates under the guidance of the Illinois Department of Public Health (IDPH).  At the time of the Special Park Board Meeting on June 26, 2020, the IDPH had not released formal guidance in regards to opening pools to the public during Phase 4. Once the guidance from IDPH becomes available, there will be a Special Park Board Meeting called to make a final decision on the pool.

Bill Trees Memorial Park Pool will remain closed while our region is in Phase 3 of the Restore Illinois Plan. The pool operates under the guidance of the Illinois Department of Public Health (IDPH).  At the time of the Special Park Board Meeting on May 29, 2020, the IDPH had not released formal guidance in regards to opening public pools.  The insurance provider for the park stated not to open the pool until there is guidance from IDPH.  Under Phase 3 of the Restore Illinois Plan, groups of 10 or less individuals would be allowed to gather with social distancing and face coverings.  It would be difficult, if not impossible, to operate under these restrictions in a public swimming pool environment.  The opening of the pool will be reassessed if/when there is official guidance from the state/IDPH on safe operation of public pools.